In partnership with the United Community Housing Coalition, the Quicken Loans Community Fund granted funds to over 30 Detroit neighborhood organizations for outreach to prevent tax foreclosure. Those groups employed more than 400 Detroit residents to knock on the door of all 60,000 Detroit homes at risk of tax foreclosure.

In 2013, the Obama administration convened the Detroit Blight Removal Task Force to chart a course to eliminate blight in Detroit. Co-chaired by Dan Gilbert, founder and Chairman of Quicken Loans, the Task Force sought to understand the extent of blight in the city. To do so, it commissioned a project called Motor City Mapping.

The effort brought together hundreds of Detroit residents, Quicken Loans team members, and other resources from the Quicken Loans Family of Companies and local tech firms, Loveland Technologies and Data Driven Detroit, to evaluate the condition of all 385,000 properties in Detroit. At the conclusion of the project, the Task Force issued a report that contained this warning about tax foreclosure in Detroit:

“Without intervention, county tax foreclosure will continue to sweep across the city until the inventory of foreclosable properties is exhausted. Speculators will buy cheap property and allow it to deteriorate. Despairing and frustrated residents will continue to walk away from their tax-foreclosed homes and from Detroit. Unscrupulous landlords will evict tenants and scrap their own properties. […] Even the swiftest and most aggressive fight against today’s blight will accomplish very little if we don’t address the conditions that led to it.”

The way the tax foreclosure system plays out in Detroit is the result of a statewide system created by a 1999 state law—Public Act 123. However, no city in Michigan has experienced the rate of tax foreclosures seen in Detroit. In Detroit, nearly 1 in 3 properties have entered a tax foreclosure auction sometime in the last 10 years — a major contributor to the erosion of homeownership in Detroit.

In recent years, the Quicken Loans Community Fund has taken significant steps to research and address the human cost of the tax foreclosure system. 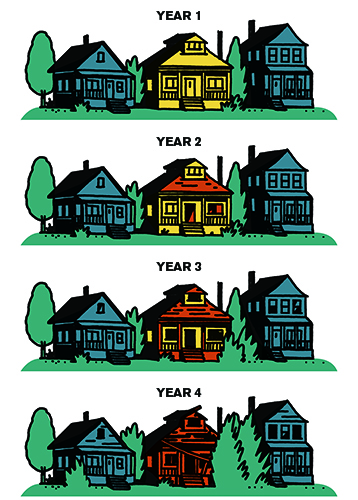 What We Learned in Neighbor to Neighbor

After knocking on 60,000 doors and spending the last year finding success with a number of tax foreclosure prevention programs, we have assembled five key findings that can help stabilize neighborhoods across Detroit, with the goal of making the tax foreclosure crisis and chronic tax delinquency things of the past.

1
Residents Lack Information on Tax Delinquency and Helpful Programs
Direct outreach, like Neighbor to Neighbor, to all tax-delinquent homes in Detroit should happen every year in the spring, when temperatures are warmer, and there is time to help residents ahead of the annual fall tax foreclosure auctions. Canvassers equipped with the Loveland smartphone app should collect data and deliver information to all homes in Detroit with owners who are struggling to pay property taxes.

2
Homeowners Need More Opportunities to Get Property Tax Exemptions
Eligible homeowners should have ample, and well-advertised, opportunities to apply for the city of Detroit’s property tax exemption (PTE), the Homeowner’s Property Tax Assistance Program, which can eliminate current year taxes for homeowners with low incomes. Property tax exemption workshops should be held in community centers across the city, and plenty of government and nonprofit staff should be trained to help residents complete their application.

4
Paying for Property Taxes Monthly Would be Easier
Today, Detroit homeowners receive their tax bill in two installments—about 85% of the property tax bill arrives in the summer, and 15% arrives in the winter. This unwieldy split leads to budgeting problems and can lead to tax delinquency. A citywide information campaign should help Detroiters take advantage of the monthly Plan Ahead program created by the City in 2019.

5
Tenants Want the First Chance to Buy Tax Foreclosed Homes
Tenants who face tax foreclosure should not suffer the consequences of their landlord’s neglect. Tenants should have the first opportunity to buy the home they’ve been renting for the cost of the property taxes owed. The City of Detroit has, and should continue to, exercise its Right of Refusal through the Make it Home program to pull rental properties from the auction process and make homeownership possible for tenants.

Learn how the United Community Housing Coalition’s Make it Home program, sponsored by the Quicken Loans Community Fund, is turning renters into homeowners.

“Detroit’s collapsing structures and vacant lots didn’t just ‘happen.’ They are the physical result of dire economic and social forces that pulled apart the city.”

Talk to People Early, Directly, And In Person to Produce Better Outcomes

The theory of the Neighbor to Neighbor program is that there’s no reason to wait until the third year of tax delinquency, when a property is on the doorstep of the tax foreclosure auction, to see if someone needs help. Outreach should be conducted when a property becomes tax delinquent in year one.

Tax foreclosure is a sensitive subject. Residents often feel isolated and ashamed when they know they are facing tax foreclosure. The best method of communication is direct outreach in person from a trusted community partner. That is the model employed in Neighbor to Neighbor.

In partnership with the United Community Housing Coalition, the Quicken Loans Community Fund granted funds to over 30 Detroit neighborhood organizations for outreach to prevent tax foreclosure. Those groups employed more than 400 Detroit residents to knock on the door of all Detroit homes at risk of tax foreclosure, delivering tax foreclosure prevention information and collecting data at each property. The findings are presented in the Neighbor to Neighbor report.

The Quicken Loans Community Fund and the Neighbor to Neighbor partner organizations believe there is a better way to keep Detroiters in their homes, build neighborhood wealth, and fund city services. We believe these findings can achieve these goals, and end the tax foreclosure crisis in Detroit.

Would you like more information or do you have some questions for us? Please email info@n2ndetroit.org.